Market Drop - No, It's Not Time To Panic

On Friday, February 2, the Dow Jones industrial average dropped 666 points. Yesterday, it fell by 1,175 points. No Chicken Little, the sky is NOT falling.

When you look at the bigger picture and take a long view of the market you can see recent events are no reason to panic.  The market was relatively stable for all of 2017, with no more than a 2% decline on a single trading day. That in itself is unusual. Typically, in an average year, there are multiple days where the S&P falls more than 2%. In 2016 there were 5 such days, 2015 had 6, 2014 had 4…. etc.  Because no such drop occurred over the past 18 months and the markets have been unusually stable, investors are starting to panic.

Fears are further compounded by talk of points versus percentages.

Again, if you take a look at the long view, you’ll see there were similar dips in January 2016 and August 2015. Neither of those dips nor this one amounted to a 10% drop that would lead to a market correction.

Recent market events can certainly seem scary but should be taken with a grain of salt. In a recent New York Times piece, Neil Irwin tells us when you step back and look at the bigger picture you’ll see there is no reason to panic.

As a financial advisor, this is an opportune time to reach out to investors who may likely be worried. Unless they’re living in a cave, investors are seeing news reports and headlines sounding alarms. Consider reaching out via email or a shareholder letter posted on your website.

Looking for other ways to communicate during periods of volatility? 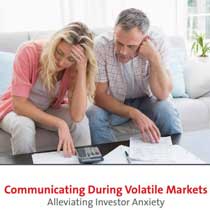 More in this category: « Ready, Set, Grow: What Does It Take To Grow Your Mutual Fund? Love Your Sales Team? Show Them! »
back to top